Chronic back pain: Pioneering surgery rids man of pain and helps him to walk again

AFTER three years of debilitating back pain that had left him housebound and reliant on a wheelchair or walking sticks just to get from one room to another, Charles Slater was contemplating suicide. He had given up hope of ever being able to walk properly again but pioneering surgery has changed all that. 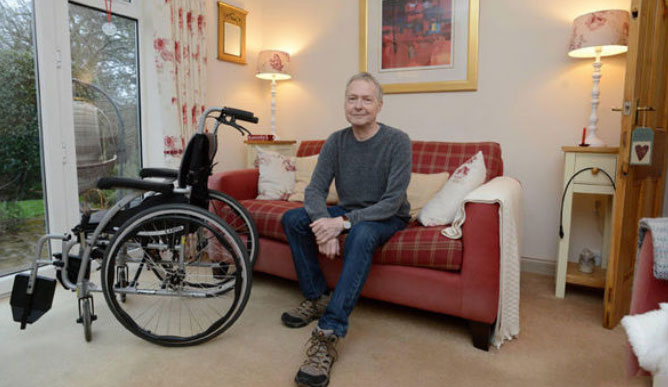 Doctors had thought that they had tried everything: surgery, steroid injections, morphine, cognitive therapy and counselling, yet nothing could relieve his pain.

Barely able to shuffle more than a few steps at a time, Charles, 60, a retired television VTR editor, could no longer walk the dog, play his guitar, or climb on to the bike that he used to ride for 15 miles a day.

In fact medics had told him there was nothing more they could do and he faced spending the rest of his life immobile and in excruciating pain.

“I had no life and thought about ending it all,” recalls Charles, who lives near Newcastle with his wife Joanne, 47. He has two grown-up children Mark, 31, and Emma, 27.

“The morphine made me depressed and lethargic and my wife no longer had a husband, she had a patient. We could not go anywhere or do anything and we argued.

“I could only sleep sitting up against a stack of pillows and spent my days in a reclined position because it was the only way I could get any relief.”

Eight million people suffer with back pain and like many of them Charles’s problems stemmed from seemingly innocuous circumstances. He rues the warm day in August 2014 when he decided against spending £30 to hire a cement mixer while building a kitchen extension.

“I mixed the cement myself in a wheelbarrow, which meant that I was bending awkwardly to try to shovel the heavy mass,” admits Charles.

“When it is wet it weighs a ton and I started to get terrible pain in my lower back. But I carried on.”

Four days later, in acute pain and unable to pass urine, Joanne took him to A&E. There doctors told him that if they did not operate the next stage would be paralysis. He had emergency surgery hours later but it was only the start of his problems.

Over the coming months he had six steroid injections into his spine and became increasingly immobile. He was refused further surgery because of his medical history – having been diagnosed with Type 1 diabetes as a toddler that led to him having a kidney transplant.

Despite seeking a second opinion the answer was the same. So nobody is more incredulous than Charles that now, after three years of agonising back pain, his life has been completely trans- formed thanks to cutting-edge spinal surgery at Spire Leeds Hospital last May.

In the end it was a friend who is a keen paraglider who threw Charles a lifeline. He mentioned a website detailing various surgeries that had been effective for fellow gliders who had broken their backs in accidents, which is where Charles came across Deb Pal, consultant neurosurgeon at Spire Leeds Hospital.

“At my first appointment with Mr Pal in December 2016 he gave me hope because he said that, subject to me passing various medical tests including angiograms, he was willing to operate.”

Mr Pal has a special interest in minimally invasive surgery for revision spinal procedures and explains: 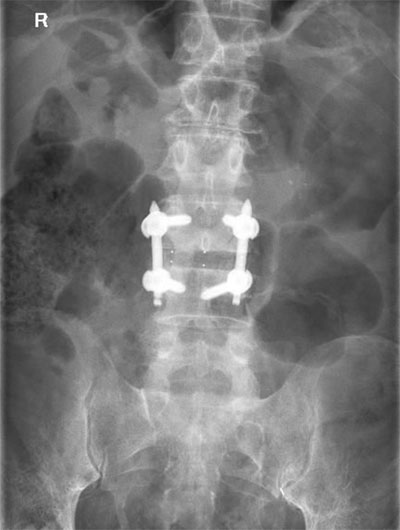 “Following his previous back surgery Charles had developed a slipped vertebra causing compression and narrowing of the nerves. He remained in constant pain and his condition was progressively deteriorating.”

Mr Pal suggested a groundbreaking and relatively new procedure called XLIF (eXtreme Lateral Interbody Fusion) surgery, which is carried out by only a handful of surgeons in the UK.

XLIF is minimally invasive and involves an incision of about 3cm in the patient’s side rather than access from the back. The worn discs between the vertebrae can then be removed and the gaps filled with a plastic cage filled with bone graft.

An XLIF procedure can be performed in about an hour. Most patients stay in hospital for only 24 hours and do not need to wear a brace. “The fact that it is minimally invasive meant Charles would be back on his feet quicker and there was a better chance of correcting his spinal balance,” adds Mr Pal.

Funded by private health insurance, Charles had stage one of his surgery last May to correct the slipped disc and take pressure off the nerve.

Two weeks later he returned to hospital to have screws and rods inserted (with minimal invasion) to stabilise that segment of his spine. “Afterwards there was a period of a month during which the pain eased and I was able to start walking,” Charles adds. “By August I had come off the morphine.”

Charles is now pain free and can sit, stand, sleep, walk and drive normally again. He soon hopes to resume the volunteering work at a hospice that he had been forced to give up and he and Joanne have big plans for the summer.

“We are planning a holiday and I want to get back on my bike for rides with Joanne again,” Charles says. “I have enormous gratitude for Mr Pal. He didn’t just put my back right, he saved my life.”